Budapest is gorgeous: the buildings are impressive, the views from Buda are breathtaking, and I can wander through the city for hours at the time without getting bored. The winter in Budapest can be a little cold to be outside a lot (-20°C last January!), but there are also different experiences in Budapest during winter than during summer.

Winter is cold, but also very cozy, warm, and festive. So throw on all your clothes (I’m not even kidding), and go out with friends and family to enjoy the cold and atmosphere. The mulled wine or hot chocolate is extra enjoyable afterward! I put together a list five things to do in Budapest during winter.

There are a ton of sights and activities indoors in Budapest. Attend an opera, for example. Visit museums like the Hungarian National Museum, House of Terror Museum, or Museum of Applied Arts. Also fun, the interactive Miniversum, where you can see Hungary and some of its neighboring countries in miniature! 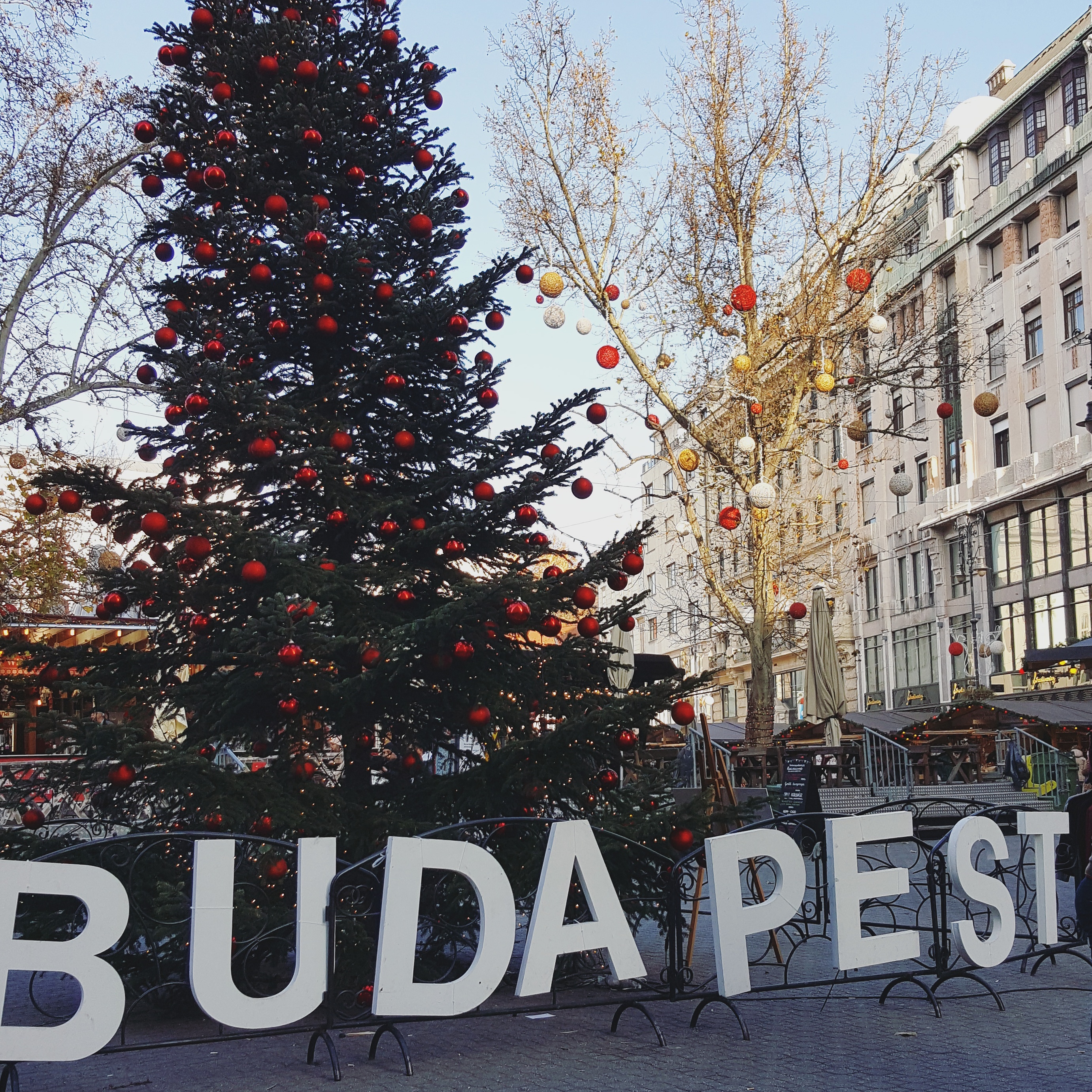 If you’re visiting Budapest in the beginning of winter, you’ll find several Christmas markets throughout the city. The one at Vörösmarty tér starts halfway November each year. You’ll find handmade products, but also traditional foods and drinks like kürtőskalács (chimney cakes) and mulled wine. There’s also live music and other performances. The Christmas market at Vörösmarty tér is open until January 1st.

Other Christmas markets can be found in front of the St. Stephens Basilica, as well as in Deák Ferenc utca.

Városliget (the city park) is the largest park in Pest. There’s a restaurant, zoo, circus, several museums, the Vajdahunyad castle, and the Szechenyi baths. Next to the castle is a lake, where you can rent rowing boats or pedalo boats during summer. During winter, part of the lake is frozen and you can go ice skating. If you skate fast enough, you’ll be warm in no time!

There are other places where you can go ice skating, although at the castle is the best option in my opinion. It’s the biggest rink, and the castle in the background makes the whole thing picture perfect. Other (smaller) and cheaper) rinks are near the St. Stevens Basilica, at Nyugati Pályaudvar, and near several malls. 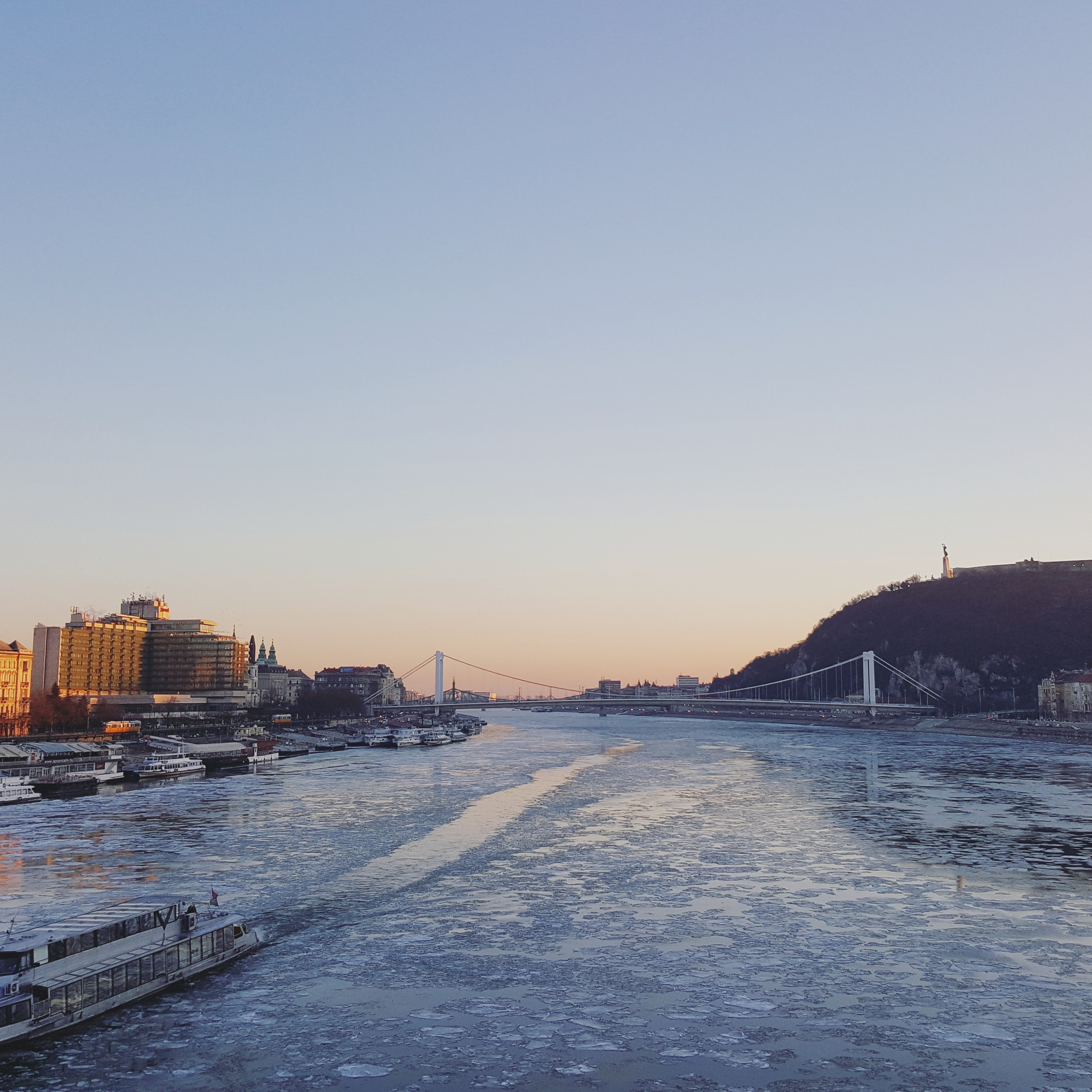 Budapest is stunning, also during winter. There’s still a ton to see and it’d be a shame to skip it just because it’s cold outside. Take a walk along the Danube, for example, one of the best places to enjoy the views over Buda. And a (partly) frozen over Danube is quite impressive as well!

Talking about views: a climb up the Citadella or Castle Hill will warm you in no time, and you’ll get a fantastic view at the end. Afterwards, visit one of the Christmas markets to warm up with a big mug of hot chocolate or a glass of mulled wine. Don’t miss the warm, fresh kürtőskalács.

And are you opting for a wander session through the city? There’s enough to see; a lot of stores go all out with festive decorations during the season, and many cafes and restaurants are also decorated.

Warm up in the thermal baths

Ahh, Budapest: city of baths. Thermal baths are spread through the city. The best-known are the Széchenyi baths and Gellért baths. The first is the biggest thermal bath in Europe, with eighteen indoor and outdoor baths between 20°C and 40°C. That’ll get you warm! The Gellért baths are part of the Gellért hotel, near the Gellért hill (yes, the one with the Citadella on top).

Bonus: the Széchenyi baths are even more impressive during winter than during summer, because of the steaming baths!

Of course, there’s a LOT more to do in Budapest. You can go shopping, there are dozens of other museums, and don’t forget to enjoy some sights from inside, like the St. Stevens Basilica and Matthias Church.

What do you prefer to do in Budapest during winter? Leave your must-dos in the comments, I’m curious!

I'm sorry to my Hungarian friends, but kürtőskal

Beauty around every corner; who knows where this w