I absolutely love (city) views, and what’s better than a view over my favorite city? Not a lot, that’s right. Today I’m sharing the most beautiful views in Budapest, from Buda as well as Pest!

Most views in Budapest are from the Buda side, simply because this is where the hills are. Keep in mind that you’ll need to walk some hills for most view points in Buda. Bonus tip: go up just before dusk. This way you’ll see the view in the daylight (with blue skies hopefully), as well as with sunset and the lights of the city.

The Gellért hill is between the Szabadsághíd (Libert Bridge) and Erzsébethíd (Elizabeth Bridge) on the Buda side. From here you have a gorgeous view over the river and Pest, but also over Buda. A good point to decide on your route to the next sight 😉

It’s a little climb if you’re walking up (and a search for the right way, I always end up taking different paths each time), but the view is totally worth it. Most hop on-hop off buses stop close to the top by the way, in case you’d rather not walk or want to see a lot in a short amount of time.

On top of the Gellért Hill, you’ll find the Citadella and the Hungarian Statue of Liberty. The Citadella was built in the 19th century by the Austrians, to impress the inhabitants of Budapest. Or actually, they were built by Hungarians, forced by the Austrians. The Statue of Liberty was placed after World War II to celebrate the liberation of Hungary.

All those high points in Buda don’t only provide great views from that side of the city, they also form a beautiful skyline from the Pest riverbank. You’ll recognize the Gellért Hill and the Buda Castle within a second, but you can also easily identify the Matthias church and Fishermans bastion. Cool to see which buildings you’ll recognize during the day, and breathtakingly beautiful during the evening. Definitely don’t skip a walk (or two) along the riverbank on the Pest side!

I love to walk from the Liberty Bridge (the green one) towards the Parliament. You can easily reach Liberty Bridge (Szabadsághíd) with metro line 4, at the stop Fővám tér. You can also take trams 47 and 49.

Look at it from the other side: literally! St. Stefanus Basilica (or St. István Bazilika, in Hungarian) is located on the Pest side. The basilica is definitely worth a visit, even if only for the art where all known Hungarian painters and artists of the time worked on. A good bonus is a stunning view from the dome. The basilica is 96 meters tall, just as tall as the Parliament; the tallest buildings in the city.

It’ll cost you 600 HUF (around €2) to walk up. You can choose between walking up 364 steps, or walk up half that and take an elevator for the other part. Once upstairs, you’ll have a wide view over Pest, as well as the hills of Buda.

The basilica is close the central square Deák Ferenc tér. Metro lines 1, 2, and 3 stop here, as well as a ton of buses and trams.

The Fishermans Bastion is an amazing piece of architecture, unlike anything I’ve ever seen. The locals are very proud of it, it’s often cleaned so it stays all white. Right next to the Bastion you’ll find the Matthias Church. Its mosaic roof is a real eye-catcher in the daylight. This is where Frans-Jozef and Elizabeth (Sissi) were crowned in 1867.

From the Fishermans Bastion, you have the perfect view over the Parliament, the most beautiful building in Budapest (I think). During the summer, there’s a restaurant in the Bastion and unfortunately, you can’t take in the view from the halls. You’ll either have to pay to go up the Bastion or stand in line with other tourists to wait your turn for pictures.

You can walk up to the Fishermans Bastion from the riverbank, but also easily from the Buda Castle. Buses 16 and 16A also stop in front of the Matthias Church.

Buda Castle is a historic building, about 70 meters above the Danube. Yes, you also have dazzling views from here! You can walk up from the street, I think this is easier to walk up than the Gellért hill. If you’d rather not walk, there’s a funicular that will take you up for 1200 HUF (about €4, round trip is 1800 HUF, around €6). It’s opposite the Chain Bridge (Széchenyihíd).

The castle was destroyed several times but always renovated. After the castle was destroyed during World War II, they found remains of an old castle during the renovations. Part of it was dug up and can be visited. You can walk around the castle, gardens, and surroundings for free. Inside the castle, you’ll find the Budapest History Museum, Hungarian National Gallery, and National Széchenyi Library. For an even higher viewpoint, you can even go up the castle’s dome.

There you have it, my favorite views in Budapest. And to be honest: my favorite thing to show visitors!

Which view is your favorite? 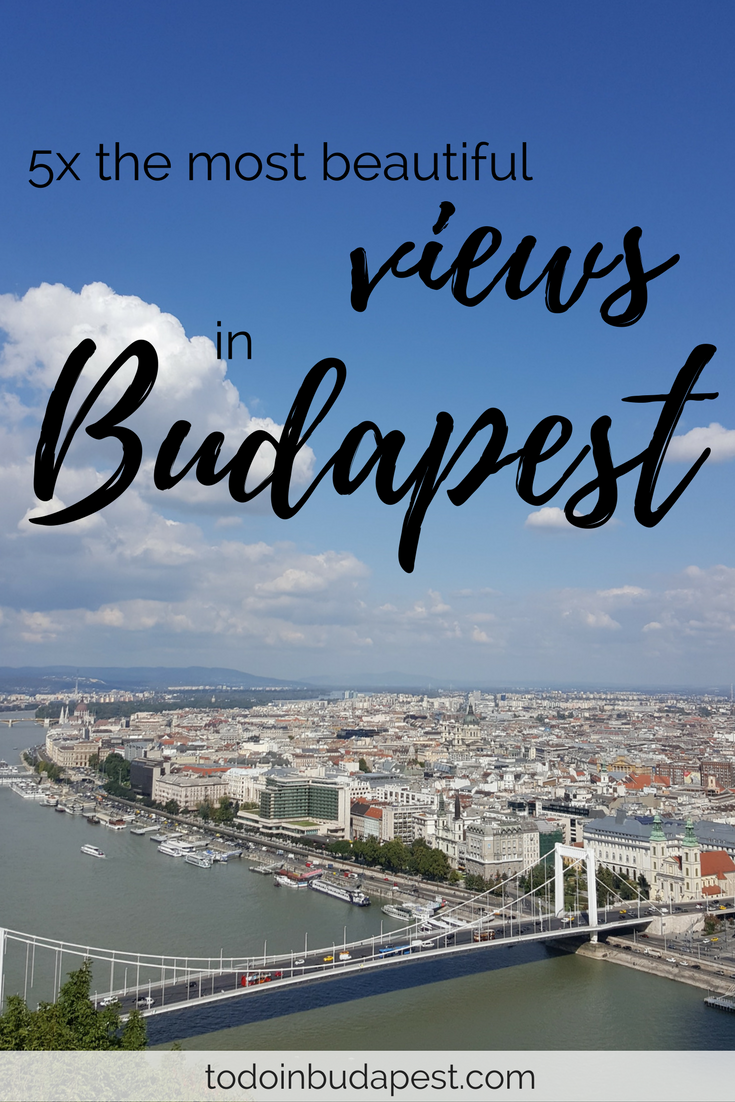