Budapest is a green city. There are a ton of parks and green spaces spread throughout the city. Every knows the City Park (Városliget), and Margaret Island (Margit Sziget) – the green heart of Budapest. On the Buda side of the city, there are the Buda hills, including parks and possibilities to hike. Last month I walked/hiked up Jánoshegy with my sister, the highest point in Budapest. And it was worth it!

The top of Jánoshegy (János hill) is the highest point in Budapest with 527 meters. The hill is in the Normafa area. In this green area, you’ll find hills filled with parks, playgrounds, forest, restaurants, etc. There are several walking, running, and bicycling paths. We saw families with children in the playgrounds, couples on dates, but also friends enjoying the cooler weather. That can only mean Normafa is always a good idea.

If you want to go for a walk without ending on a busy street after a few minutes, Normafa is a great place to go. There are several routes mapped out, including signs showing the way. When my sister and I went, we had a goal: to go to the Erzsébet lookout tower on Jánoshegy. The highest point in Budapest, stunning views (we all know how much I love views), and the tower is named after Sissi, that historical figure practically every (European) girl is a fan of. 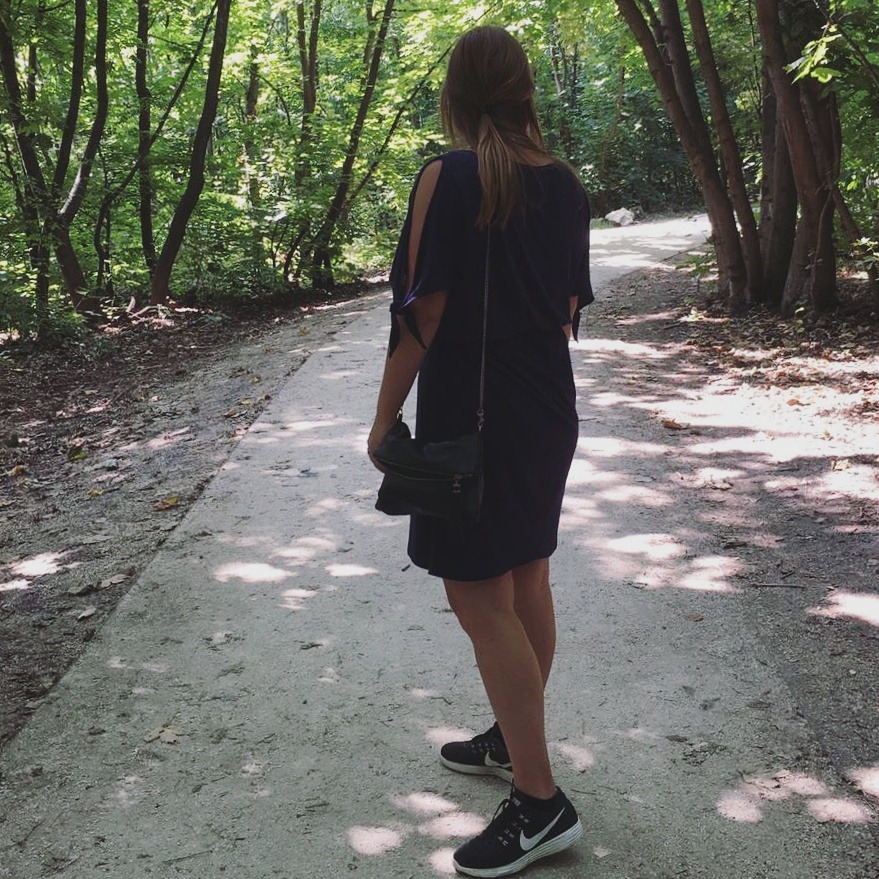 My sister is scared of heights, which is why we walked up to the top of Jánoshegy, instead of taking the chairlift. You can take bus 21 and 21A from Széll Kalmán tér in Budapest. Get out at the last stop (Normafa), from there you only have to follow the big path. There are signs along the way, follow the sign saying ‘Erzsébet-kilátó’. Every now and then, you’ll catch a glimpse of the tower, but luckily it’s closer than it seems.

There are more ways to get to the top of Jánoshegy, although you’ll have to climb the last bit yourself.

You can take the chairlift, Zugliget Libegő. This will take about 15 minutes and you’ll see some fantastic views over Budapest along the way.

A trip with the chairlift costs 1000 HUF (about €3,30) per adult. To get to the chairlift, you take bus 291 from Nyugati Pályaudvar and get of at the end stop.

– Read more: Your complete guide to public transport in Budapest

The Gyermekvasút is the children train. No, it’s not a train just for kids. This train is totally managed by kids between 10 and 14 years old. Only the driver is an adult, and of course, there’s adult supervision.

A ride with the children train is about 11 km long, a one-way trip takes about 45 minutes. You’ll stop in Normafa along the way, but also higher on Jánoshegy. A great outing with kids and you’ll see more of the area at the same time.

A one-way trip costs 700 HUF (around €2,30), a round trip 1400 HUF (about €4,60) for adults. It’s half that for kids. You can reach the stops of the Gyermerkvasút with several busses and trams from Budapest. Find more info on their website. 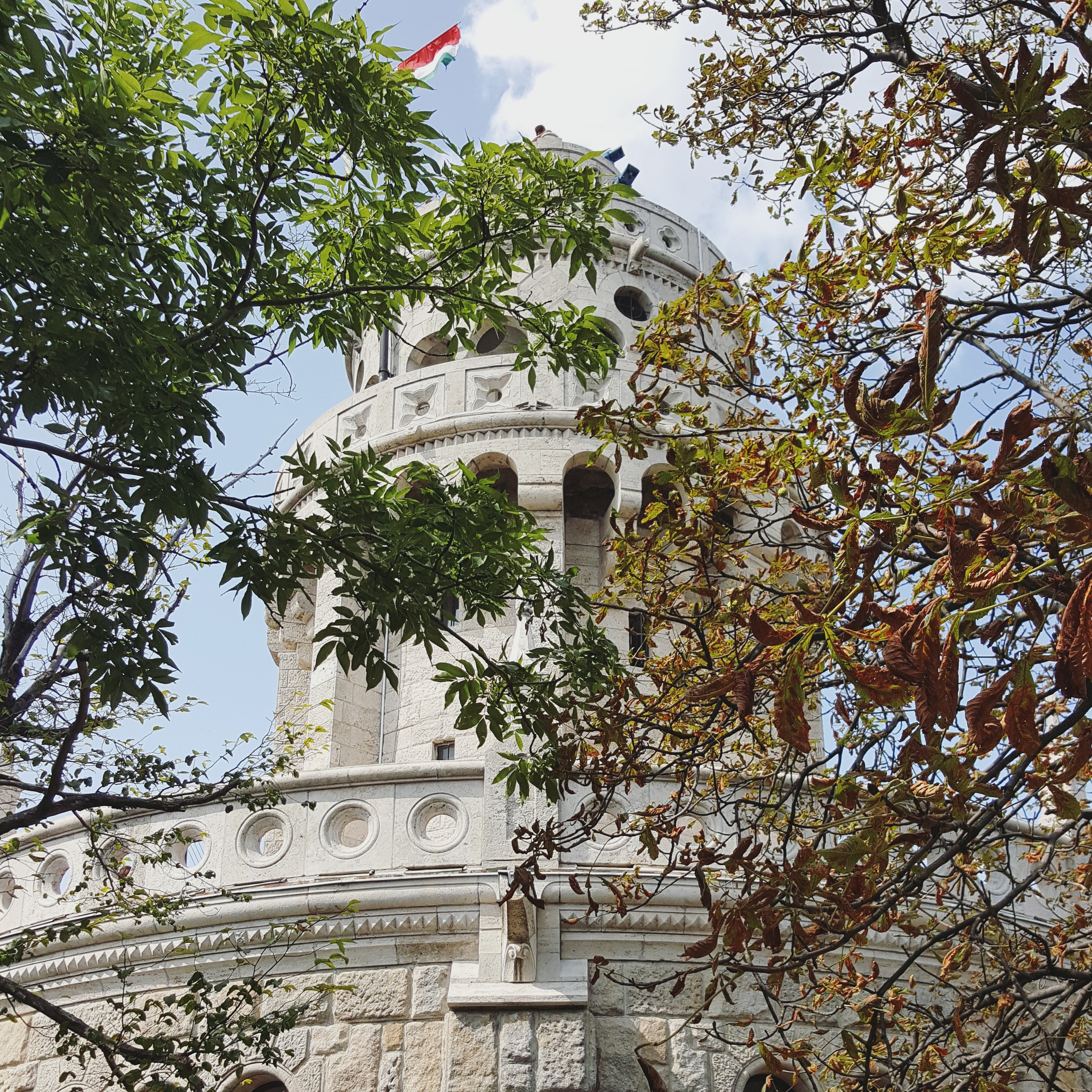 Then you’ve finally reached the top of Jánoshegy, but that doesn’t mean you’re there yet. In the winter you may be able to enjoy the view already, but during the summer the trees block the view. So you’ll have to climb up a few more steps of the Erzsébet lookout tower.

The whole tower is four floors, including three that offer views over the surroundings. There are a few binoculars, but you won’t need those if the weather is good. I recognized the Parliament instantly! If you know a bit more about Hungary and its topography, you may be able to recognize more places. 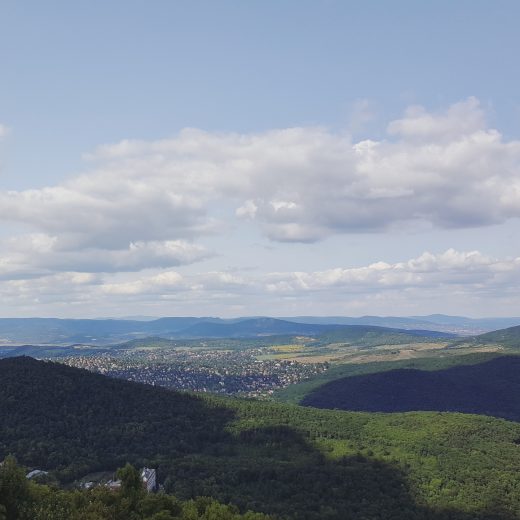 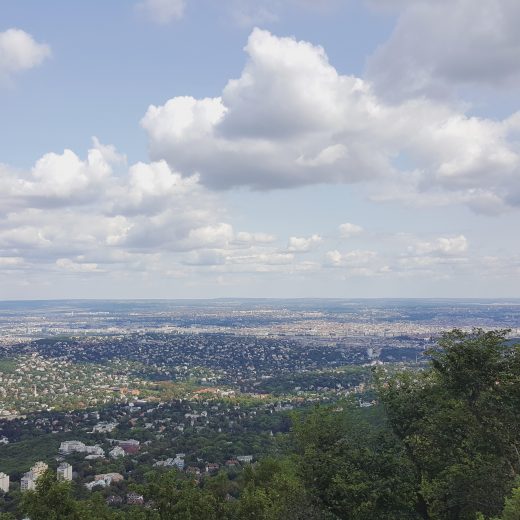 The view from Jánoshegy/Erzsébet lookout tower

The views from the lookout tower are phenomenal. You can see practically all of Hungary from here.

Okay, I’m just kidding, because Hungary is a lot bigger than where I’m from (the Netherlands). But you can see all of Budapest, plus I heard that you can see 77 km far with good weather! You would even be able the see the hills/mountains of Pilis and Mátra.

Even if you don’t know or recognize these parts of Hungary, the view is worth the climb. Hills/mountains, the Hungarian plains, Budapest: I love it. If you’d rather look over Budapest from up close, I’d recommend walking up the hills next to the Danube: like Gellérthegy, Castle Hill, or at the Fisherman’s Bastion.

Both my sister and I liked this little trip from Budapest city center. The views are gorgeous, and walking through Normafa is a nice break from the noise of the city. If you’re staying in Budapest for longer than a weekend, I can definitely recommend going here.

Have you ever been up to Jánoshegy? What did you think?